The first and worst cause of errors that abound in our day and age is spiritual pride. This is the main door by which the devil comes into the hearts of those who are zealous for the advancement of Christ. It is the chief inlet of smoke from the bottomless pit to darken the mind and mislead the judgement.

Pride is the main handle by which he has hold of Christian persons and the chief source of all the mischief that he introduces to clog and hinder a work of God. Spiritual pride is the main spring or at least the main support of all other errors. Until this disease is cured, medicines are applied in vain to heal all other diseases.

It is by spiritual pride that the mind defends and justifies itself in other errors and defends itself against light by which it might be corrected and reclaimed. The spiritually proud man thinks he is full of light already and feels that he does not need instruction, so he is ready to ignore the offer of it.

On the other hand, the humble person is like a little child who easily receives instruction. He is cautious in his estimate of himself, sensitive as to how liable he is to go astray. If it is suggested to him that he is going astray, he is most ready to check into the matter.

Nothing sets a Christian so much out of the devil’s reach than humility and so prepares the mind for divine light without darkness. Humility clears the eye to look at things as they truly are. Psalm 25:9—He leads the humble in justice, and He teaches the humble His way.

If spiritual pride is healed, other things are easily corrected. Our first care should be to correct the heart and pull the beam of pride out of our eye and then we shall see clearly.

Those who are most zealous in the cause of God are the most likely to be targeted as being filled with pride. When any person appears, in any respect, to be noticeably excelling others in his Christian walk, odds are ten to one that it will immediately awaken the jealousy of those about him.

They will suspect (whether they have good reason or not) that he is very proud of his goodness and that he probably thinks no one as good as he is, so that everything he says and does is observed with this prejudice.

Those who are themselves cold and dead, and especially those who have never had any experience of the power of godliness on their own hearts, will easily entertain such thoughts of the best Christians. This arises from nothing less than a secret hostility against essential and fervent holiness.

But the zealous Christian should take heed that this does not prove a snare to him, and the devil take advantage of it to blind his eyes from beholding the true nature of his heart and to think that because he is charged with pride wrongfully and with an unkind spirit, that such charges are not sometimes valid.

Alas, how much pride the best have in their hearts! It is the worst part of the body of sin and death; the first sin that ever entered into the universe and the last that is rooted out. It is God’s most stubborn enemy!

But, because of the nature of spiritual pride, it is the most secret of all sins. There is no other matter in which the heart is more deceitful and unsearchable and there is no other sin in the world that men are so confident in. The very nature of it is to work self-confidence and drive away any suspicion of any evil of that kind. There is no sin so much like the devil as this for secrecy and subtlety, and appearing in great many shapes that are undetected and unsuspected.

Spiritual pride takes many forms and shapes, one under another, and encompasses the heart like the layers of an onion: when you pull off one, there is another underneath. Therefore, we have need to have the greatest watch imaginable over our hearts with respect to this matter and to cry most earnestly to the great Searcher of hearts for His help. He that trusts his own heart is a fool.

Since spiritual pride in its own nature is so secret, it cannot be so well discerned by immediate intuition on the thing itself. It is best identified by its fruits and effects, some of which I will make mention of below together with the contrary fruits of Christian humility.

Spiritual pride causes one to speak of other persons sins, their enmity against God and His people, or with laughter and levity and an air of contempt, while pure Christian humility disposes either to be silent about them or to speak of them with grief or pity.

The spiritually proud person shows it in his finding fault with other saints, that they are low in grace and how cold and dead they are, and are quick to discern and take notice of their deficiencies. The eminently humble Christian has so much to do at home and sees so much evil in his own that he is not apt to be very busy with other hearts.

Some who have spiritual pride mixed with great learning and joy, earnestly speaking to others about them, are likely to be calling upon other Christians to emulate them and sharply reprove them for their being so cold and lifeless.

There are others who are overwhelmed with their own vileness, and when they have extraordinary discoveries of God’s glory, they are taken up by their own sinfulness. Though they are disposed to speak much and very earnestly, yet it is very much in blaming themselves and exhorting fellow Christians, but in a loving and humble manner.

Pride: Ministering in a Harsh Spirit

It has been the manner of spiritually proud persons to speak of almost everything they see in others in the most harsh, severe language. It is frequent with them to say of other’s opinion, conduct, advice, coldness, silence, caution, moderation, prudence, etc. that they are from the devil or from hell.

Such kind of language they will commonly use, not only towards wicked men, but towards those who are true children of God and also towards ministers of the gospel and others who are very much their superiors. Christians who are but fellow-worms ought at least to treat one another with as much humility and gentleness as Christ treats them.

Spiritual pride often causes persons to act different in external appearance, to effect a different way of speaking, to use a different sort of dialect from others, or to be different in voice, countenance or behavior. But he that is an eminently humble Christian, though he will be firm in his duty, however different — going the way of heaven alone, though all the world forsake him — yet he does not delight in being different for difference’s sake.

He does not try to set himself up to be viewed and observed as one distinguished, as desiring to be accounted better than others — despising their company or conformity to them — but on the contrary, desires to become all things to all men, to yield to others and conform to them and please them in all but sin.

Spiritual pride takes great notice of opposition and injuries that are received and is prone to be often speaking of them and to be much in taking notice of their aggravation, either with an air of bitterness or contempt.

Pure and unmixed Christian humility, on the other hand, causes a person to be more like his blessed Lord when reviled: quiet, not opening his mouth, but committing himself in silence to Him who judges righteously. For the humble Christian, the more the world is against him, the more silent and still he will be, unless it is in his prayer closet, and there he will not be still.

Pride: Presumption Before God and Man

Another effect of spiritual pride is a certain self-confident boldness before God and men. Some, in their great rejoicing before God, have not paid sufficient regard to that rule in Psalm 2:11 — Worship the Lord with reverence, and rejoice with trembling.

They have not rejoiced with a reverential trembling, in a proper sense of the awful majesty of God and the awful distance between Him and them. There has also been an improper boldness before men that has been encouraged and defended by a misapplication of Proverbs 29:25 — The fear of man brings a snare… It is as though it became all persons, high and low, men, women and children in all Christian conversation to wholly abandon all manner of modesty or reverence toward man.

Not that any should refrain from Christian conversation, but with such humility as in I Peter 3:15—But sanctify Christ as Lord in your hearts, always being ready to make a defense to everyone who asks you to give an account for the hope that is in you, yet with gentleness and reverence.

Another effect of spiritual pride is to make the subject of it want attention. People often tend to act in a special manner as though others ought to take great notice and regard of them. It is very natural to a person that is very much under the influence of spiritual pride to take all the respect that is paid to him.

If others show a disposition to submit to him and yield in deference to him, he is open to it and freely receives it. It becomes natural for him to expect such treatment and to take much notice if a person fails to do so, and to have an ill opinion of those who do not give him that which he feels he deserves.

One under the influence of spiritual pride is more apt to instruct others than to inquire for himself and so naturally puts on the airs of control. The eminently humble Christian thinks he needs help from everybody, whereas he that is spiritually proud thinks everybody needs his help. Christian humility, under a sense of other’s misery, entreats and beseeches, but spiritual pride tries to command and warn with authority.

As spiritual pride causes persons to assume much to themselves, so it treats others with neglect. On the contrary, pure Christian humility disposes persons to honor all men as from I Peter 2:17. To enter into disputes about Christianity is sometimes unseasonable, such as in meeting for Christian conference or for exercises of worship.

Yet, we ought to be very careful that we do not refuse to converse with carnal men, as though we counted them not worthy to be regarded. On the contrary, we should condescend to carnal men as Christ has condescended to us, to bear with our unteachableness and stupidity.

Article from Mongerism, taken from Jonathan Edward’s writings on: “Some Thoughts concerning the Present Revival of Religion in New England” 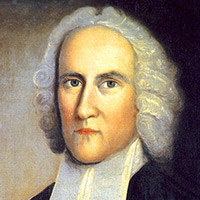 (1703-1758)
Jonathan Edwards was a Puritan theologian, pastor, and devout Calvinist who was said to be one of America's greatest preachers, he was a leading figure in the Great Awakening.