“I can’t believe in Christ,” is the complaint we often hear from the inquiring. What does it mean? Are those who make it in earnest? Have they considered what they say?

The vessel was pretty high out of the water, and there was no ladder, either of rope or iron, at his side for the poor lad to descend by, so as to reach the boat which lay below.

The lad looked over and saw his position. There was the boat, and here was the slowly sinking vessel. He heard shouts for him from below; he saw some five or six stout men waiting to catch him; but he could not make up his mind to quit his hold.

He saw the swell of the sea, as it heaved the boat up and down; he observed too, the distance between himself and his deliverers below; and his heart failed him. What if he should miss the boat, and drop into the sea, instead of the stretched-out arms beneath? He clung to the rope with all his might, and made as though he would go back into the vessel. But the shouts came up again, “Let go the rope!” He dared not go back, and he was afraid to let himself drop. So he clung to the rope as if it were his only safety. Again the shouts were heard, “Let go!” His answer was, “I can’t let go.”

At last, as the danger increased, the loud but kindly voices from below overcame his fear and distrust. He did “let go”; and without an effort dropped into the strong arms which were waiting to receive him. He was safe; and as he realized his safety, he could not help smiling at his own folly in refusing to let go, and in saying, as his reason for not letting go, that he could not. “I can’t believe in Christ,” is the complaint we often hear from the inquiring. What does it mean? Are those who make it in earnest? Have they considered what they say? Are they not exactly like the poor lad hanging over the steamer’s side and crying “I can’t let go?” If he had had confidence in the boat below and in the men below, would he have remained in this strange position and uttering this strange cry? Had he not more confidence in the rope to which he clung than in the boat which lay ready to receive him? He saw there was danger, or he would not have grasped the rope; but he had the feeling that there was less danger in clinging to the rope than in dropping into the boat. So he continued to cling with all his might to that which could not save. If his safety had depended upon his grasping it, the cry, “I can’t hold any longer, my strength is gone,” would have been most natural and intelligible; but, when his safety depended upon his ceasing to cling to that which could not save, and simply drop into that which could save, the cry was foolish and untrue.

So it is with the complaint of the anxious to which we have referred. They do not see the open door of the ark, the stretched-out arms of the Deliverer. It is that Deliverer who cries to them, “Let go; I am waiting with open arms to receive you.” But they seem to think that He is commanding them to do some great thing, to put forth some prodigious exertion of their own strength; and so they reply to all His messages of grace, “I can’t, I can’t!” He sees them clinging to self with all their might; and He says, “Let go, let go;” but they reply, “We can’t!” is not this folly? Is it not a rejection of His finished work?

Suppose, when Jesus called to Zaccheus to come down from his sycamore, the publican had replied, “I can’t!” what would he have meant? Had the Lord bidden him climb the tree, he might have said, perhaps, “I can’t!” but when Christ says “Come down!” the excuse would have been absurd.

Suppose when the father, in receiving back the prodigal, had said, “Go into the house, and get the best robe and put it on and come to me,” there might have been some meaning in the son’s saying, “I can’t!” But when the father says to the servants, “Bring forth the best robe and put it on him,” such an excuse would have been absurd, and would only have betrayed the son’s unwillingness to receive the robe at all. For the father leaves nothing for the son to do; all he desires is that he should receive; and it is as if he had said, “Allow me to clothe you; allow me to put the best robe upon you.” He undertakes for everything; for the putting on the robe as well as for the robe itself.

That which many call the difficulty of believing is the essence of self-righteousness. Yes; it is this that lies at the root of, or rather is the root of, this difficulty. Men cling to self as the lad clung to the rope; they will not let it go; and they cry all the while that they can’t.

I admit the difficulty. It is a root of bitterness. But it is far deeper than many think. It is far worse and more serious than those who speak of it will admit. It is man’s determined self-righteousness that really constitutes the difficulty. He is unwilling to let this go; and he says “I can’t!” to cover over the guilt of the “I won’t!”

Deep down in man’s depraved being lies this awful evil, which only God can remove, this determination not to give up self. He deceives himself sadly in this matter, in order to cover his guilt and to pass the blame of his unbelief on God. He holds that he has some great thing to do: though God has declared a hundred times over that the great thing is done! He wants to do the great thing, and to get credit of doing it; and because God has declared that the great thing is done, “once for all,” never to be done again, he retires into himself, and tries to get up another great thing within himself, by the right doing of which he will please God and satisfy his own conscience. Acceptance of the great thing done is what God presses on him as altogether and absolutely sufficient for his salvation and his peace. But this he shrinks from. He thinks he must wait, and work, and struggle, and weep before he is in a fit state for accepting; and therefore it is that he replies to all the messages from the “ambassadors of peace,” “I can’t.” He won’t do that which God wishes him to do; he substitutes something else of his own, some process of preparation for acceptance: and because he finds he makes no progress in this work of “voluntary humility,” he says, “I can’t!”

God brings him face to face with the cross, saying, “Look and live!” But he thinks this too simple, and he turns away seeking for something to do! God sets the fountain before him, and says, “Wash.” He says, “I cannot,” and turns away to something else. God brings him the best robe, the righteousness of the Righteous One, and offers to put it on. But this is too simple. It leaves nothing for him to do —nothing but to be clothed by another’s hand in another’s raiment. And so, in pretended humility, he postpones the acceptance of the robe, under the plea that he cannot put it on! God brings him face to face with His free love, and says, “Take this and be at rest.” But as this still takes for granted that the great thing is done, in virtue of which this free love is to flow into the sinner, and that God now wants him simply to recognize this great work and its completeness, in order to his acceptance, he hesitates or turns wholly from the Divine proposal, refusing to let the love flow in, just because it is so absolutely free! He resembles the Syrian general whom Elisha told to wash in Jordan that his leprosy might be healed. “Naaman was wroth, and went away, and said, Behold, I thought he will surely come out to me, and stand, and call on the name of the Lord his God, and strike his hand over the place, and recover the leper. Are not Abana and Pharpar, rivers of Damascus, better than all the waters of Israel? May I not wash in them, and be clean? So he turned and went away in a rage” (2 Kings 5:11,12). And may we not address him in the words of the servants on that occasion: “If the prophet had bid thee do some great thing, wouldest thou not have done it? how much rather then, when he saith to thee, Wash, and be clean?”

The simplicity of the gospel, however, does not lessen man’s depravity, nor supersede the necessity for the power of the Holy Ghost. It is in reference to this free gospel that man’s “evil heart of unbelief” has always exhibited itself most strongly. The gospel is simple, the way is simple, the cross is simple; but man’s heart is wholly set against these. He resists and refuses. He prefers some way of his own, and he casts the blame of his own evil upon God.

Hence the need for the Holy Spirit, by whose hand the Almighty works upon the human soul in ways so unseen and simple that, when the man has at length believed, he wonders how he could so long have stood aloof and resisted such a gospel. To disarm the enmity, to remove the hardness, to open the eye, and to renew the will, the Spirit operates. “The wind bloweth where it listeth,” and we cannot “tell whence it cometh, and whither it goeth: so is every one that is born of the Spirit.”

It is man’s deep depravity and total alienation from God that makes the power of the Almighty Spirit indispensable for his renewal. But it is of great importance that he should not be allowed to make use of that depravity as an excuse for not returning to God, or to abuse the doctrine of the Spirit’s work by making it a reason for cleaving to self, and refusing to believe the gospel; as if he were more willing to be wrought upon than the Spirit is to work, or as if he wanted to believe, but the Spirit would not help him.

It was man’s guilt that rendered the cross necessary; for if that guilt remained unremoved, all else would be vain. To be under condemnation would be to be shut out of the kingdom for ever. To have the Judge of all against him in the great day would be certain doom. The cross has come to lift off that guilt from us, and to lay it upon another; upon Him who is able to bear it all; upon Him who is mighty to save. That which should have come upon the sinner has come upon Him, that the sinner might go free. The Judge is satisfied with the work done on Calvary, and asks no more: and when the sinner is brought by the Holy Spirit to be satisfied with that which has satisfied the Judge, the chains that bound the burden to his shoulders snap, and the burden falls, to disappear for ever—buried in the grave of the Substitute, from which it cannot rise.

I Can’t Let Go by Horatius Bonar from Chapel Library 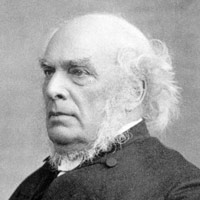