The Christian in College

The Christian life, as is often pointed out, cannot properly be segmented. When one comes to a saving knowledge of the Lord Jesus Christ, each and every aspect of his life comes under Christ’s control. To draw a line between work and worship, viewing one as secular and the other as sacred, is to miss a fundamental teaching of God’s Word: “Whatever you do, do all to the glory of God.” (1 Cor. 10:31). So for the Christian in college, they are to be a student to the glory of God.

For the college student, this truth is of course applicable in the area of his or her education. Any supposed Christianity that becomes somehow less relevant as one moves from church to dormitory or classroom is false. If you are not a Christian when you study, you won’t be one when you pray!

Undoubtedly, the moral and intellectual environment of a college presents problems for anyone who truly wants to follow Jesus. To live a holy life in the midst of fellow students who are attempting to prove how “liberated” they are is not easy. Along with these pressures to conform to impure life styles, there are attacks upon the truths of Christianity. These are especially difficult because, more often than not, they are presented by the very people who are supposedly explaining what the world is all about, that is, the teachers.

How should a Christian react to the various challenges to his faith encountered in the classroom? A good place to begin is by recognizing the origin of the philosophy of education that has today become predominant. Here some would point to the instrumentalism of Dewey or the empiricism of Locke. Others would perhaps go further into the past and see the beginnings of contemporary education in the idealism of Plato. Now it is true that all of these men, in their differing ways, have profoundly affected educational thought. Yet theirs are but derivative systems, built ultimately upon a single foundational philosophy – a philosophy which came into existence long before even Plato’s speculations.

The educational theory of these and many other thinkers throughout the ages can ultimately be traced back to that system of thought which began with Adam and Eve’s desire for a wisdom not grounded in God and His revealed Word. Since the time of Satan’s promise of God-like knowledge through rebellion, men have been setting their reason above and against God’s revelation. All philosophies, including the various philosophies of education, have from that time been the result of either believing the truths of God, or believing the lies of Satan. In the former case, God is recognized as the basis of all knowledge. In the latter, man, deceived by Satan, attempts to arrive at knowledge by beginning from himself. Some have called this latter position humanism. This is a fitting designation, inasmuch as in it humanity becomes its own ultimate standard of reference. In this scheme human thought becomes legislative for what can and cannot be, and man declares himself the “measure of all things.”

By recognizing this as the underlying philosophy of modern education, the Christian can readily see why there is conflict in the classroom. Any mention of Biblical absolutes strikes at the heart of the system of autonomy (Self-law) that man has erected.

Of course, this autonomy expresses itself in different forms. In one classroom an atheistic teacher may denounce belief in God as the height of folly. In another a mild-mannered, sophisticated liberal may speak religiously about the “Fatherhood of God and the brotherhood of man,” yet in the same breath deny that God’s written Word is reliable. Both cases actually boil down to the same thing: man sets himself above God and His revelation.

This is not to say that this attitude will be equally apparent in every discipline. By the very nature of the subject matter dealt with, man’s rebellion is seen more clearly in some disciplines than in others. (For example, a Christian is more likely to encounter opposition in a psychology class than in a math class.) Nor is it meant to imply that every teacher in a public school is consciously involved in an attempt to undermine the truthfulness of God. It is simply pointing out the fact that the prevailing philosophy in American higher education at this time is based on the assumption that man can begin from himself, without reference to God, and come to valid knowledge.

In light of this, the Christian who decides to attend a non-Christian college must realize that he is entering a battlefield, not a playground. Truth will be continually on trial, and knowing that life and death hang in the balance, he must always be “ready to make a defense to every one who asks him to give an account for the hope that is in him.” (1 Peter 3:15) In making this defense, it will be helpful for the Christian to keep certain guidelines in mind.

It will do little good and sometimes great harm to speak out on things of which you are ill-informed. It is often great wisdom simply to keep your mouth shut. When you do say something, make sure you have reliable information. This means that extra work will have to be done by the Christian student, because he must not only understand what is presented in class, but also know how the truth of God relates to it. Qualified Christians have written in almost every area of study, but it will require some extra effort to investigate these things.

This is not to say that the Christian in college needs to investigate every challenge to Christianity that comes up. Autonomous man can manufacture abstruse questions much faster than you can investigate them. Beware lest minor issues divert you from the really important things. Probably the best general rule is that the Christian should have a good grasp of what the Biblical world-view involves in his particular area of study. For instance, if you are an art major, you should know what type of art is consistent with Biblical truth.

2. As a Christian in College: Don’t state things as absolutes unless they clearly are Biblical absolutes. [Proverbs 30:5-6]

Much harm has been done to the cause of Christ by people who have put forward as Biblical absolutes concepts that are not truly taught in the Scriptures. Men often do this almost unconsciously by reading into the Bible the prevailing philosophical and cultural norms of their day.

An example of this can be seen in the reaction of many Catholic and Protestant theologians of the sixteenth century to the new theories of Copernicus. His theory that the earth revolved around the sun was rejected by many professing Christians on the ground that it contradicted Scripture. Now, nowhere in the Bible is it said that the sun revolves around the earth, but the churchmen of the middle ages had, to a large extent, incorporated into their thought the Greek concept of an earth-centered universe. Consequently, they carried this concept into their reading of the Scriptures and concluded that the Bible absolutely excluded the Copernican view. In speaking out against the Copernican system, they believed themselves to be defending Biblical truth; in actuality they were defending the pagan world-view of Aristotle and Ptolemy.

Recognizing this danger should make us cautious, but not cowardly. There are many things that are clearly taught as absolutes in God’s Word, and we need not be afraid to present them. We must be careful, though, not to bring those things that are clearly presented in Scripture into disrepute by stating as absolutes our opinions about unclear areas.

There is simply no place in the Christian life for a critical, argumentative spirit. It is quite possible to be right in what you say, and yet be wrong in how you say it. Your primary purpose in class is not to win intellectual arguments, but to bring glory to God. A clean life, warm friendliness, and truthful, sincere attitude will bring more honor to your Lord than any great expertise at winning arguments. Remember, “the wisdom from above is first pure, then peaceable, gentle, reasonable, full of mercy and good fruits, unwavering, without hypocrisy.” (James 3:17)

Most of your classes will, in one way or another, reflect the attempts of finite man to understand the creation apart from the revelation given by the Infinite Creator. Christians recognize the futility of such attempts and look to the Triune God Who has revealed Himself in the Old and New Testament as their standard of reference in all things. Because God made the heaven and earth and sea and all that is in them, it seems no strange thing that He should be the One to look to for the correct interpretation of man and the world and all else. In whatever discipline you pursue, correct and reliable knowledge will of necessity be based on God’s infallible, inerrant Word. Therefore, the foundation for whatever you study will be your study of the Bible. Moreover, if you as a Christian are going to “contend earnestly for the faith which was once for all delivered to the saints” (Jude 3), it stands to reason that you must study God’s Word to know what constitutes that faith.

The more the Christian sees of the tragic results of man’s autonomous quest for knowledge, the more the beauties of God’s Word stand out. Truth, for the Christian, is a treasure far more valuable than gold and silver and precious stones. These things, like the earth they come from, will soon pass away, “but the Word of our God shall stand forever.” (Isaiah 40:8)

Though textbooks and reports and tests will take much of his time and energy, still the Christian will say with the Psalmist, “I have rejoiced in the way of Thy testimonies, as much as in all riches. I will meditate on Thy precepts, and regard Thy ways. I shall delight in Thy statues; I shall not forget Thy word.” (Psalm 119:14-16)

The most important knowledge for any man is the knowledge of God. No man can be wiser than the man who simply loves God and keeps His commandments. In the end it will matter little if men have lauded you or laughed at you, if you were counted wise or foolish. What will matter is whether you have walked with God and made it your aim and desire to be pleasing to Him in everything you do. This is true wisdom and man’s reason for existence.

So then, lift your life as a Christian in college up to Him moment by moment. He will give you the strength to mount up with wings like an eagle, to run and not be weary, to walk and not faint. With God as your Rock and Redeemer, your Sun and Shield, you can fight the good fight of faith knowing that victory is certain.

by Richard Ochs
Written in 1978 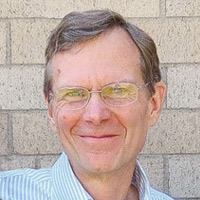 of Lake Road Chapel
For over 35 years, Richard Ochs has co-pastored with Charles Leiter in Kirksville, MO. Prior to this, they served together in a mission work in Germany. Richard grew up in rural central Iowa, received his bachelor's degree from Upper Iowa University and his master's degree from Northeast Missouri State University (Truman State). He and his wife, Rene', have five adult children.