Much More — Saved From Wrath

Romans 5:9 – Much more then, having now been justified by His blood, we shall be saved from the wrath of God through Him.

What are the fruits of justification? Count your many blessings. The believer has…

Here is a salvation message—saved from wrath. However, it is not so much for the unsaved as for the saved. It is yet a further assurance statement for the believer, as is the whole of Romans 5.

The theme is the cross of Christ—justified by His blood. It is as though Paul was not satisfied that he had said enough on it in verses six and eight—Christ died for the ungodly, Christ died for us.

The new thought is deliverance from the wrath of God. It had not been stated this clearly yet. However, it is really the reverse way of saying we have peace with God (v. 1). It was suggested as propitiation, that is appeasing wrath, in 2:8-10 and 3:25.

Consider the Meaning of Justification

We use the term justification in everyday talk. Some typewriters justify the margin, that is, they line it up with the standard. We might ask someone how they justify themselves, that is, how do you reckon yourself right in doing such (Luke 10:29). It is, moreover, courtroom terminology, that is, the judge either justifies or condemns the criminal. And we see from that, it is a declarative, forensic act (Isa. 5:23, Prov. 17:15). Justification is the pronouncement God makes on the sinner, upon his exercise of saving faith, that he is righteous because of his imputing to him the righteousness of Jesus Christ.

True or False: Upon saving faith, we know our past sins are forgiven and now we must tow the line?

No, justification is more than forgiveness. Rather, it is an imputation of Christ’s righteousness to our account. Thus, we have a positive,

But how can God justify the unjust and yet be just? Isn’t that abominable to him (Prov. 17:15)? That brings us to…

The Basis for Justification

The believers are justified by His blood. Justice was executed.

The blood takes us back to those Old Testament Jewish altars. Written, as it were, around those altars were words like, the wages of sin is death, the soul that sins must die, without the shedding of blood there is no remission, and I have given you the blood on the altar to make atonement for your souls. We could go back further to the doorpost of Egypt where we see the Jewish fathers slaying the Passover lamb and sprinkling the blood. We could go back to Mt. Moriah and there find a lamb was slain in the place of a little boy. We could go back to the garden and find the guilty pair clothed with, not fig leaves, but animal skins—blood had been shed.

Why the altars? God was teaching substitutionary blood atonement. But is it possible for animals to atone for men (Heb. 9:9)? No, they rather foreshadowed a Lamb sent from God who could. Now we, like they, by faith, lay our hands on that dear head of his and confess our sins trusting that he bore the guilt of our sins in his body on the tree and we have peace through the blood of his cross. When a person savingly believes, our guilt is put on Jesus’ books and His righteousness is put on ours. What is the basis for our acceptance in heaven? Not penance, good works, hard works (all of which are dead works), but the blood of Christ.

The Ultimate End or Fruit of Justification

We shall be saved from wrath. Man has had his days—New Year’s Day, Valentine’s Day, Ground Hog Day, April Fools Day, Independence Day, etc. God has a day, a day of wrath, a day of judgment on all unrighteousness. He has fixed that day (Acts 17:31) and no one can stop it. All will be there—presidents, popes, princes, preachers, politicians, paupers, and prostitutes.

It will be the calamity of all calamities to meet this angry God unprepared. Tough verdicts have been handed down by judges but who will be able to bear those words from the judge of all the earth, you fool, depart from Me, cast him out. It is a terrifying thing to fall into the hands of muggers, but how about the living God (Heb. 10:31)? We’ve seen the haystacks burn, houses burn, cities burn, forests burn, but here we are talking about a cosmic holocaust. Was there wailing in Egypt when the death angel went through? Yes, but what shall it be when on the Day of Wrath? Weeping and gnashing of teeth.

This is what the Christian is saved from! We were formerly children of wrath (Eph. 2:3). We walked around under the sword of divine judgment (John 3:36).

What is the application? The security of the believer. If you have on the robe of Christ’s spotless righteousness, the flames of hell won’t touch you. But you ask, much might happen before I get to glory? No, all justified shall be glorified (8:30). But what about remaining sin? No condemnation! But what about my blind spots? Who shall charge the elect, it is God that justifies (8:33)! But what about the devil’s accusations? Who is he who condemns, it is Christ that died (8:34)! But what about the devil’s devices? They overcame him by the blood of the Lamb (Rev. 12:11)! What about my conscience? Much more shall the blood of Christ cleanse your conscience (Heb. 9:14). But is this redemption lasting? Will I fall? He entered into the holy place by His blood and obtained eternal redemption for us (Heb. 9:12). But who can stand when He appears? When I see the blood I will pass over you (Ex. 12:13). But won’t God possibly be at odds with me? Call out to Zion, her warfare is ended, her iniquity is pardoned (Isa. 40:1).

Believer, Jesus’ shed blood has quenched the fires of wrath. He has drained the cup of wrath and none remains. The sword of divine justice has found its victim and looks no further. 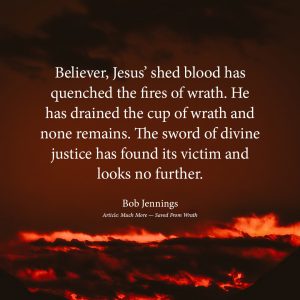 What are you trusting to get you through the eternal flames? How shall you escape the sentence of hell? Will you keep on in sin, storing up wrath (2:8) like the criminal storing up stolen goods in the back of his house, only to further condemn himself? Flee, as from a storm, the wrath to come. Make quick steps to the mercy seat where the blood of the Lamb was spilled. Jesus died, not to make good folks better, but to save sinners. Are you bad enough?

This chapter was taken from the book, “A Devotional Study of Romans” which can be downloaded for free here.

(1949 - 2012)
Bob Jennings began a pastoral ministry in Kirksville, Missouri in 1978 in the church that now meets at Lake Road Chapel. In 1983 he moved to Sedalia, Missouri to pastor a small flock which God had raised up in that city (now meeting at Highway M Chapel). Bob spoke at many conferences both in the United States and Eastern Europe. He also did evangelism outreach on various university campuses over the years. The Lord blessed Bob and his wife Terri with five children. Bob is respected as a godly man by all who knew him, perhaps most by his family. You can find encouragement from his many messages online, and also from his online journal which he kept during his days with cancer. Bob fell asleep in the Lord November of 2012.