Conrad Murrell: The Passing of One Valiant for Truth 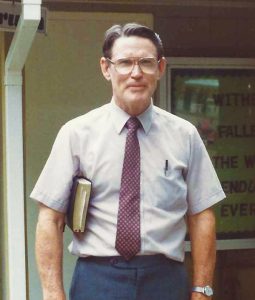 The passing of a man of God always brings special memories and attention to those who knew that man. With some of God’s servants, it really can be called the end of an era or at least, the end of something very special.

This is the case with the home call of Herbert Conrad Murrell on Friday mid-afternoon in Bentley, Louisiana at the age of 89 years. I think of Conrad’s own words he spoke about his own father’s death, “Forever with the Lord!” Now it is true of him–forever with the Lord. His life and ministry, ever since his conversion at age 25, has been a fragrance of Christ to countless numbers of people. That is always a tribute to the mercy and grace of God toward his child. Nothing good is of ourselves, but only comes to us from above.

Every generation seems to have a special man of God (or several simultaneously) arrive on the scene at the right time in God’s kingdom to serve uniquely as a prophet or anointed preacher of God’s truth, to impact their generation in a special way, well beyond the norm. Only God can raise up such men–Elijah, Daniel, John the Baptist, Luther, Knox, Whitefield, and others. R. C. Sproul, who departed this life also around nine weeks ago, seemed to be just such a man, whose impact widely would far exceed what the man himself probably envisioned. Conrad was in such a category himself. It is my opinion that, while he did not have as wide or as large a ministry as many great men have–C. H. Spurgeon, Martyn Lloyd-Jones or Sproul–those men had nothing on Conrad Murrell. His was an equal intellect, equal spiritual gifts, equal godliness, and an equal powerful ministry.

Frank Bartleman, in speaking of men of God in history, said–

In the various crises that have occurred in the history of the church, men have come to the front that have manifested a holy recklessness that astonished their peers . . . . so it has been in all ages. When the religious condition of the times called for men who were willing to sacrifice all for Christ, the demand created the supply; there have always been a few who have been willing to be regarded reckless for the Lord. An utter recklessness concerning men’s opinions and other consequences is the only attitude that can meet the need of the present times.

Conrad was just such a man. He was marked by fearless courage fueled by the fear of God, and no sense of self-importance. He could preach to well-known or “important” people of this world and have no desire at all to impress them, then turn around and share a meal with a simple unknown person, and treated them with the same loving respect he would anyone else.

His health caused him to cease from public ministry in the fall of 2014, but his life continued to bless those he was around, and those who came to visit him. It reminds me of what Luke says of Paul in Acts 28:24–“He [Paul] dwelt two whole years in his own rented house, and received all who came to him.” That was how Conrad finished his race, in his own home, receiving all who came to him, loving them, and enjoying time with them as long as his health allowed, until he could no longer hold conscious fellowship with anyone except God. But who knows what he heard, thought, and felt in the hidden man of the heart, as he waited his departure time?

He was a beloved brother, a faithful friend, a fearless preacher, a loving pastor, a real shepherd, a teacher with advanced intellect and gifts, a wise man above his peers, a teacher and mentor to many preachers, and one who was truly valiant for truth.

When our mutual friend, Al Whittinghill, heard of Conrad’s gain in death, he thought of Isaiah 57:1–“The righteous man perishes, and no man takes it to heart . . . . he shall enter into peace.” Bentley, Louisiana was graced with a prophet of God in their midst for over fifty years, and few there even knew it, and most of those who did, did not choose to sit under his ministry. Many today in Grant Parish have no idea that one of the finest and godliest men of their generation in the nation just passed to heaven right near where they live. No one takes it to heart. But may those who did know him, hear him, profit from him, and love him, take his death to heart today.

He is loved, is missed, will be remembered with love, and the fragrance of his life and legacy will continue. He being dead, yet speaketh. That voice points us not to Conrad, but to the Savior he so wonderfully preached and served. Take heed, brethren . . . . God sent him to us to profit withal. What a gift and what a blessing Conrad Murrell was and is–forever with the Lord! 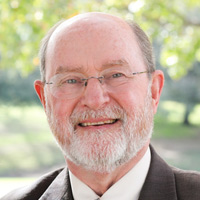 of Providence Chapel
Mack Tomlinson was ordained to the gospel ministry in 1977 in his home church of First Baptist Church of Clarendon, TX. He holds a BA degree in New Testament from Hardin-Simmons Univ. in Abilene, and has done graduate studies in Israel, and through Southwestern Baptist Seminary in Fort Worth and Tyndale Theological Seminary in Fort Worth. He has also served as an editor and book publisher. He also conducts an itinerant preaching ministry around the U. S., overseas in Eastern Europe, the South Pacific, and other areas of the world. Mack has been married to his wife, Linda, for 35 years, and they have 6 children.